Between loads of laundry today, I made my way down to the studio with the intention of whipping up a few blocks using the April RSC color -- Multicolor.

Whew, just made it in time.

I decided not to attempt an HST 9-patch since it involved looking for light-valued multicolors.  Not that I don't have any; I just didn't want to dig.

If it's not too late, I'll link up with Scrap Happy Sunday.

And now it begins, again

We've buried MIL, started probate proceedings, getting used to an empty house -- life goes on, but it is decidedly different.

Thanks, again, for all your kind offers of support and prayers.

In the last two months I was able to take a break for a few days at a time and venture out to two major quilt shows -- Mountain Quilt Fest in Pigeon Forge and AGS Paducah.  Of course, a little fabric came home with me.

I visited Pinwheels at both shows and stocked up on some more Asian fabrics, mostly Daiwabo and Serenity prints ... 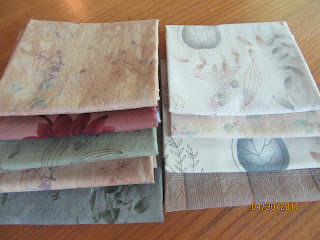 ... and Oakshott cottons, both stripes and solids. 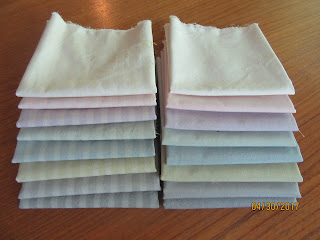 I always visit Fabric Peddlers in the Finkle Building at Paducah to see her latest Asian and Australian prints.  I brought home a yard each of these luscious Diawabo prints. 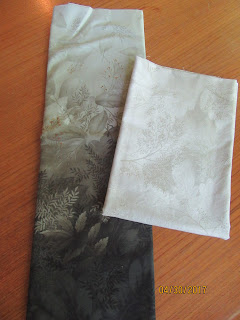 And I couldn't pass up a few modern prints from Nancy J's and Traditions at White Swan that might work in my next round robin border. 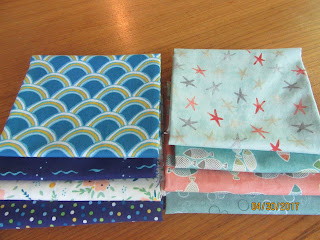 I'm thinking these purchases may be just the boost I need to get back into the sewing room.  Tomorrow is the last day of the month, my last chance to get some Rainbow Scrap Challenge blocks added to my boxes.  And maybe the predicted rain in the afternoon will be sufficient to send me to the studio rather than the garden!

You may recall that my One Monthly Goal for April was to add a round to Katie's round robin block.

My plan was to bring the green out into the next round and to repeat the star points in some fashion.  The good news is I got my round completed in time and was able to deliver it to the next name on the list at the guild meeting last Saturday.

The bad news is I lost (albeit temporarily) my camera in Paducah with my finished photographs on it.  So, with my apologies, this is the best proof I have to share with the OMG linkup party.

I went with traditional flying geese to stabilize (in my own mind, at least) the wonkiness of the original block and the first round.

The teal/coral block in front is what I will be working on for the May exchange.

I encourage you to check out other quilters' finishes at Elm Street Quilts.

New Resident on the Hill 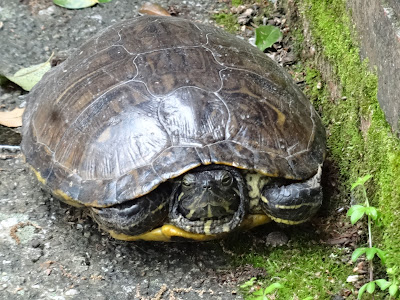 This creature showed up in our driveway this morning, just as I was getting ready to run some errands.  It "clammed up" the minute I got near so I can't be positive in my identification. 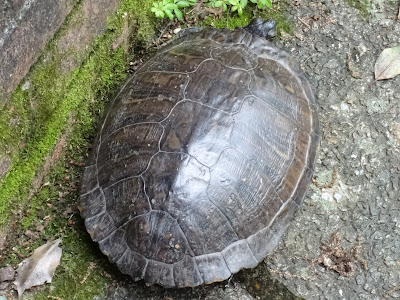 Or it could be a box turtle, though the pictures of them on the internet are more colorful. 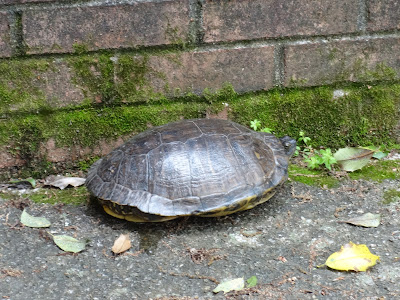 The only other snapping turtle I've seen around here had more of a
prehistoric look with a spikey back and long tail.

It was long gone by the time I got back from Kroger.

The Queen Mother has left the building

My beautiful, talented mother-in-law passed  away peacefully Saturday morning; her son, daughter, and faithful caregivers were by her side.  Angie would have been 97 in July.  She was the second oldest of eight sisters (one arrived after the photo below).  Now only the two youngest remain.


Isn't that a classic photo?  Angie is seated second from the right.

She majored in art at the University of Kansas (go Jayhawks!) and got a job during WWII as a draftsperson at North American Aviation where she met her husband.  Once the war was over, she never plied her art professionally, instead putting her talents to use behind the home sewing machine, with a needle in hand, knitting sweaters, or wielding a paintbrush.

This is one of many quilts she hand-pieced and hand-quilted over the years.  Each of the 8 sisters was to make 8 of their chosen block and distribute them to each other.  Well, all were not as talented as Angie so she ended up making a lot of the blocks herself.  She even made a second set for herself so that she could have matching spreads on their twin beds.  (I don't think she ever accepted that I am a real quilter because I do it all by machine!)

She did impeccable needlepoint, crewel embroidery, and cross-stitch work.

She rekindled the painting gene in her later years -- that is, before she forgot how to paint.


She was always generous with her creations so the entire family has quite a legacy to remember her by.  She will be missed by many.

Thanks again to all of my loyal readers for lifting Angie and the rest of our family in prayer during these last difficult days.

It was refreshing to have my son and daughter-in-law bring a picnic lunch today to celebrate birthdays for both me and my sister-in-law.

SIL and I enjoyed our repast on these plates. 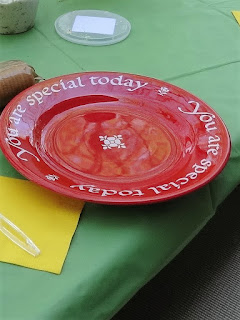 The Queen Mother continues to hang on by a thread.  I have not been able to even sew an accurate quarter-inch seam in the last two weeks.  But today I was inspired by Jo Kramer at Jo's Country Junction to break out what I have finished on this year's Bonnie Hunter mystery, En Provence, and see if I can make something with the bits I have done.

My first attempt was to simply put the nine stars with the yellow corners together.  It wasn't big enough, even though my blocks are bigger than Bonnie's (because I didn't read the directions on the first clue), and it left all the other units I had made needing a home somewhere.

So I decided to use some of them in a sashing.  First in a straight set ... 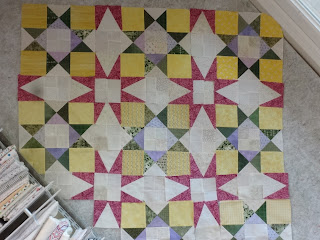 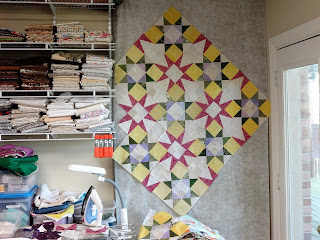 I think I'm favoring the on-point.  What do you think?  I'll come up with some creative way to use all the neutral 4Ps and purple 4Ps in the corners.  But I won't sew a stitch until life returns to normal here on the hill.

Thanks to all who have expressed concern and offered prayers.

... from quilting and blogging


Thanks for understanding.
Posted by Libby in TN at 7:54 AM 8 comments: 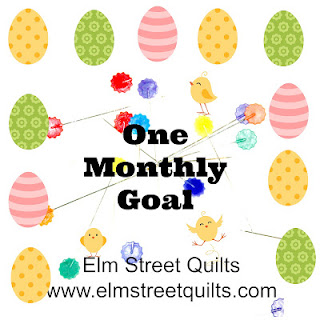 I don't expect to have a lot of available sewing time this month.  Or, better said, if I get time to sew I'm neglecting what I SHOULD be doing.  So I wasn't going to declare a One Monthly Goal (OMG).

Until I remembered I do have one obligation this month -- my addition to the round robin block that was passed on to me in March.  I've been derelict in reporting about these blocks, mainly because I wait till the last minute and forget to document my process along the way.

To bring you up to date, Music City Modern Quilters decided to try round robin quilts this year.  Two groups of six quilters are participating.  Each person started with either a block or row of their own making which was passed on to the next quilter on the list.  Each month we add to what we got and then pass it on to the next person on the list at the next guild meeting.

This was my starting block:


It's an antique block design called Rolling 9-Patch.  I thought it had a modern vibe and offered some options in terms of colors and directions.  Well, I was thrilled with the coral flying geese that Emily added in the second round (forgot to get a photo of it) and I'll look forward to seeing what happens next.

This is the first block I received:

The maker threw me a curve right away  because I had already anticipated putting whatever block I received on point!  After thinking about it for most of the month, I was up against the deadline, whimped out and opted to just add a plain multicolored border to the 15" block to give the next person more color options (forgot to photograph, again).

Here's what came my way in March:

All this circuitous rambling to say that my One Monthly Goal (OMG) for April is to finish my additions to Katie's round robin block.

When Angela at Soscrappy announced the "color" for April, it gave me pause.  Multicolor.  Really? 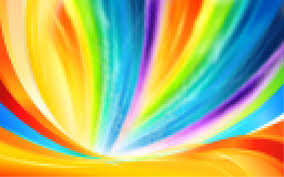 But, like Angela said, we all have those scraps that can't be classified as a particular color because no color dominates -- especially florals and multicolored stripes.

Knowing my sewing time this month is going to be extremely limited, I immediately went down to the studio mess in my basement to think about my approach which was inspired by Cynthia at Quilting is More Fun Than Housework.  I felt that her recent Scrap-a-Palooza quilts, where she combined 2-1/2" and 1-1/2"  strips to create 9" blocks, would translate well into the Rainbow Scrap Challenge.

My 1-1/2" bin had a big stack of yellow strips so I decided to make that my starting point, but I couldn't find enough coordinating multicolored 2-1/2" strips in sufficient lengths to execute my plan.  On to the FQ bin where I found a collection called "Arabesque" -- black background with a lot of bright action.  Ah-ha!  I have tons of black with bright on the shelf I can add.

So here's where I stand, two days into the multicolor month. 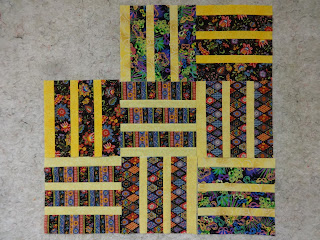 Since the blocks finish at 9", a 7x8 setting would yield a nice 63" x 72" comfort quilt.  That's 46 more blocks to make.  It's the kind of mindless sewing that I should be able to handle this month while I tend to much neglected housekeeping and yard work.

Be sure to stop by Soscrappy to see what other quilters are doing with this month's challenge.