First salad with produce from the garden. 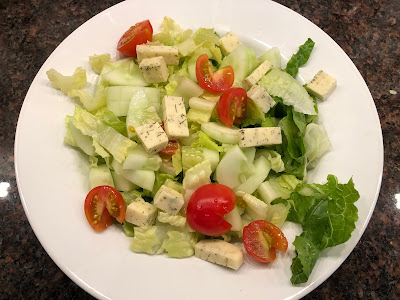 The cucumber was especially delicious.  They are a weird shape so I was a bit concerned.  There are two more on the vines right now but it doesn't look too promising to get many more.  I may just pull them out and start a fall crop of greens when the temps get a little cooler.

I have enjoyed my gardening adventure and look forward to the next season.
Posted by Libby in TN at 12:07 PM 5 comments:

I may tweek it a little more, but it is essentially ready to stitch.

This is an empty week for me in terms of social obligations so I should be able to get this together.  That will be a first for me -- finishing a class project in less than a week.  We'll see how well I do with that!  I need to catch up with some Rainbow Scrap Challenge projects, too,  before the change of color on Thursday.
Posted by Libby in TN at 7:45 PM 2 comments:

Spent two fabulous days in a class with Jan Krentz.


This morning I stitched more hexies and this afternoon I will do more designing.
That is, after I go back to Tennessee Quilts in Jonesborough
to spend the $100 gift certificate I won at dinner last night!
Posted by Libby in TN at 12:11 PM 4 comments:

... I should start something new

I'll blame it on Kate at Life in Pieces.  I'm going to try my hand at the Mosaic Mystery hosted by Cheryl at Meadow Mist Designs.

Unlike some other mysteries in blogland that have you racing to keep up, Cheryl's clues appear only once a month and extend over an 8-month period.  I think I can manage that!

The fabric requirements were announced on July 4 -- 3 fabrics and a background.  Since I am determined to use my stash, my choice had to revolve around the only background-worthy fabric that I have 3.25 yards of.  I came up with two possible scenarios -- one bright and lively, and one sophisticated and subdued.  Hoping that this might be something that would appeal to GS-1 and his soon-to-be bride, I have opted to go sophisticated.  DON'T EVEN THINK IT!  (That Libby doesn't know how to be sophisticated.) 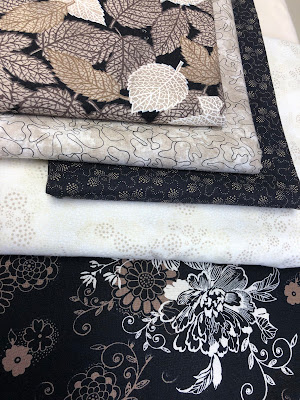 The white is the background.  The floral fabric at the bottom will be the border.  I used it to guide my other choices.  I may have to rethink the squiggly line piece as I'm not sure it has enough contrast with the background.

Worst case scenario, I might find a replacement at Tennessee Quilts 20% off sale later this week!


My first attempt at this cute little piglet turned into an indeterminate blob of pork.
It was questionable if I even wanted to try again.
But once I realized the mess was due to poor fabric choices, I set about making another one.

Reporting in at Scrap Happy Saturday with my RSC progress.


We have had so many foggy mornings on the lake lately,
I was overjoyed to wake to another gorgeous sunrise Monday morning.
The lake was so still that morning, the colors are perfectly reflected in the water.

When I stepped out on the deck to photograph the sunrise, this little creature was in my way. 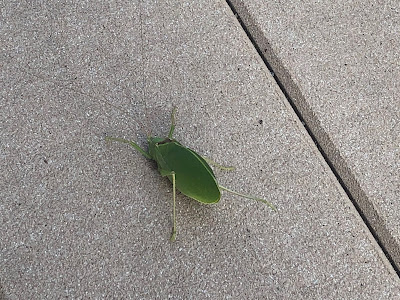 I have no idea what it is.  Just glad it didn't try to hop up on me!
Edited:  Nann was right; it's a Katydid!


And one lonely duck lounging at the spa. 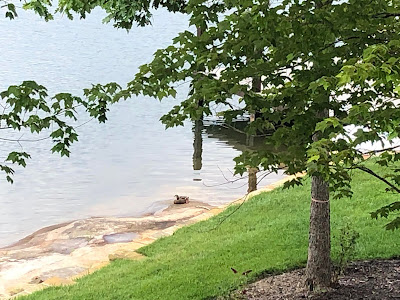 This duck frequently comes by itself and naps on the warm rocks in the afternoon.

Back in the middle of May I wrote about how Bonnie Hunter's Scrap Users Strip System doesn't work for me (read it here).  Don't misunderstand; I'm not saying that there is anything inherently wrong with her system.  It just doesn't work for me because I generally don't make scrappy quilts.

So at the time of that writing I whipped a mixed bunch of 2-1/2" strips into light/dark foursies to make Bonnie's free pattern Strip Twist.

It was one of those rare occasions where I threw caution to the wind, grabbed two strips, and started sewing.  I did put a little thought into the block combinations, trying to avoid duplicate fabrics.  And I did a minimum amount of redistribution of the blocks in the final arrangement.  Overall, it was very satisfying and I find it a very cheerful quilt that will comfort someone.  With luck, this will be fully assembled by the end of this day, including two borders. 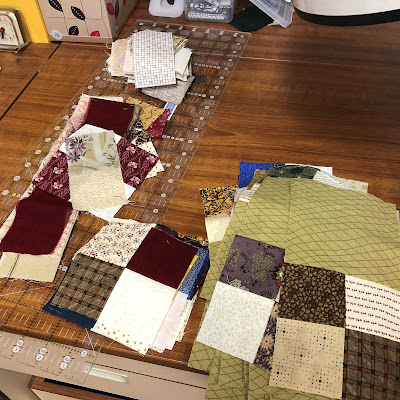 And, using Bonnie's Leader/Ender system, I worked those into 4-patches in between other sewing and then added a solid 4-1/2" square to most of them in the same manner.  I don't know about you, but at some point my L/E project demands to be finished, so last week I got most of it together.


Five more long seams and it will be a flimsy.  I generally kept the colors in a more masculine palette but I did let a few yellows and pinks in to make it sparkle.

I'll be linking up with Cynthia for Sunday's Oh Scrap!

Angela/soscrappy gave us another easy TT block this week.


The rest of my scrappy sewing this week was not pink so I will reserve that for another post.


Apparently I missed the memo about feeding and watering.  I won't say the garden is "thriving," but things have continued to grow.  And now that I'm on a more regular schedule of watering and have added a little fertilizer, we may get a little yield after all.

The Bradley tomatoes are questionable.

These are the only fruit so far on the three plants.  I got these plants from a local person and they have done poorly from the beginning.  The cherry tomatoes, on the other hand, are thriving.

Since being fertilized, the peppers have finally set fruit. 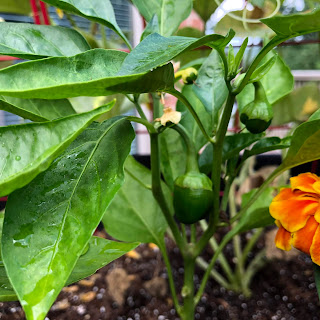 Before, the pepper would start to develop then fall off.  The cumbers are doing quite well.

They are not only climbing the trellis, they are grabbing on to anything they can find.

The dill has grown taller than the trellis.

It's time to make some chicken salad while I have fresh dill!  The rosemary in front of the dill has been delicious on roasted petite potatoes.  I'm thinking of putting in a fall crop of greens after the tomatoes are done.

Bottom line -- this has been a learning experience.  I'll try to get an earlier start next year.

New to us, anyway.

Decked out in his grey suit and black fedora.
Too slick and fast to photograph.
He runs like a roadrunner rather than hops like a robin.

Last year we had lots of bluebirds and titmice.
This year it's catbirds and gnatcatchers.
I'm wondering if the mild winter and rainy spring affected their food source ...

A New Month, A New Color

I love the first week of the month!  I usually only have one social obligation in the first week, but this month it was cancelled due to the holiday.  Which gave me an ENTIRE week to knock out my Rainbow Scrap Challenge projects.

First up I contributed a Tiny Tuesday block design so, of course, I had to work up a couple of examples. 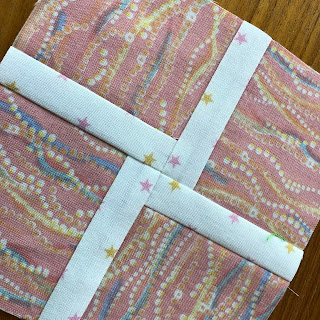 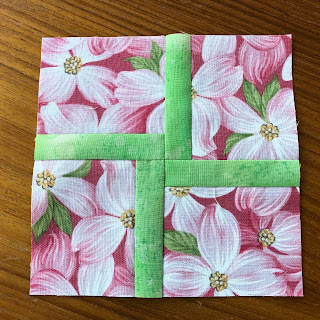 Then I tackled my eight chandelier blocks.  Honestly, it takes longer to choose the fabrics than it does to make these! 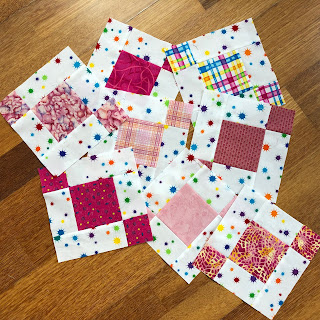 Double Shot blocks were next on the agenda -- an easy day's project.

And I finished my week with three more Buckeye Stars.

Thanks to Angela at soscrappy for keeping us all on track.  Be sure to check out what others have accomplished this week.

Oh, How I Love Pink!


I offered to help Angela with a quick block for this holiday week, so let's jump right in.

For this block I used a 2-1/2" strip of pink fabric (intentionally oversized) and a
1" strip of the accent fabric.  Each should be at least 12.5" long.

Make a stripset by stitching along the long edge and press toward the accent strip.

Cut the stripset into four 3" chunks. 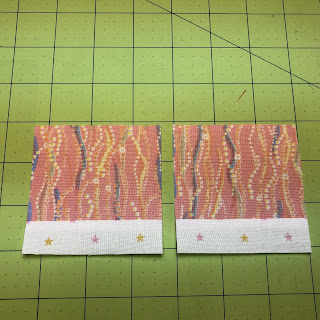 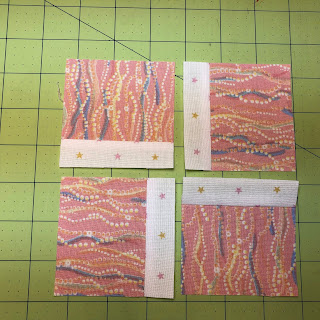 ... and assemble like a typical 4-patch block, pressing toward the accent strip.  You will need to "spin" the center seam.

Here's another block with a contrasting accent strip. 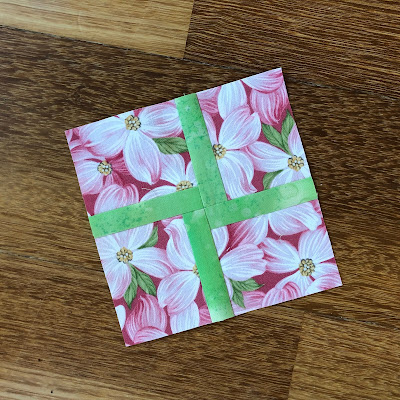 You could reverse the values with light 2-1/2" strip and a hot pink accent.
Your options are endless.

I hope you have fun with this block and still have time to enjoy the 4th!

My thyroid is just lumpy, no cancer,
and the blood work was normal, too!

Sew I have celebrated today by clearing off some surfaces in my sewing room and lining up projects for the month.

Since Angela had not yet posted the color for July, I pulled out a couple of old blue projects.  The first is Twinkle Stars (I think), a block quite a few folks were working on a couple of years ago.

I had started these for the Rainbow Scrap Challenge in January 2016.  No longer in love with them, they'll go into the orphan box.

Then I got out a blue One Block Wonder.

It doesn't really sing as a OBW.  What about a good ole Stack 'n' Whack?  I considered a strippy set ... 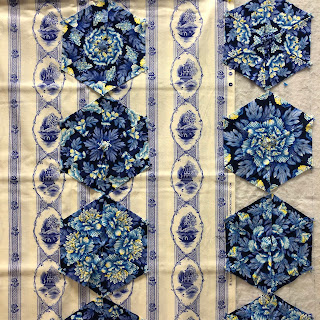 ... but that didn't excite me, either.  So I opted for stars.  Turns out I had enough fabric to make another set of blocks so it will turn out a nice throw size.  Check back later this week to see my progress.