OK, so it's Saturday.  I probably could have finished Tall Tree on Friday.  Button sewing was all that was left to do.  But it was much more fun visiting with GSs #1 and #2!  I knew I wouldn't have time after that to make it to the PO, so why push myself? 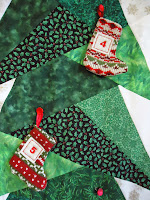 Here it is, decorated with a couple of the numbered knit stockings I bought at Cracker Barrel.  It was the display model, so they all smelled like wood smoke and I discovered that Day 9 is missing.   A good dose of Febreze fabric refresher took care of the smell.  The kids will have to be creative on Day 9.  Actually, DIL is an accomplished knitter and I know she could have done a much better job on the stockings.

It's hard to tell from the photo, but it's as tall as a door.  I thought it would be easy paper piecing, but the large chunks of fabric were awkward to handle.  Be warned:  don't wait till the last minute on this one.

After I got it in the mail I had time to make 24 Celtic Solstice units for Bonnie Hunter's new mystery.  Hoping to do a little every day so as to not be too far behind when the next clue is revealed.