I actually like brown.  I have some beautiful browns in my stash.

But the Rainbow Scrap Challenge, in my mind anyway, is to encourage using up scraps.  Turns out my brown scraps are just that -- (s)crap.

My intention was (still is) to finish Smith Mountain Morning this month. However, I discovered that my use of brown scraps in the cornerstone/log cabin blocks yielded some really unattractive blocks (think baby poop). No, I'm not going to ditch what I've done; I'm just having a hard time getting excited about finishing it. 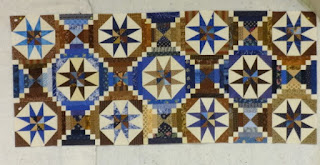 While I was dithering over what to do about the SMM situation, I decided to use the leftovers to make some string blocks. (Sorry, the lighting stinks in the corner where my design wall is.) 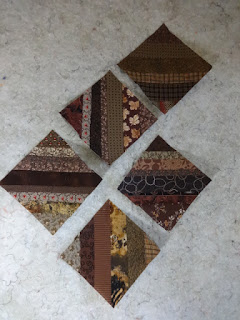 Even these lack character, but I think they will be neutralized when they are grouped with some earlier brown string blocks.

My sewing room/studio had become such a shambles that I am embarrassed to show a "before" photo, so this week I decided I had to clear out a pile every day before I could sit at the sewing machine. In the process I came across some Wink & a Smile blocks. 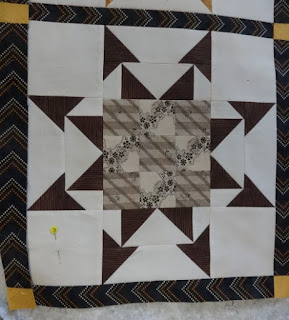 Coincidentally they were mostly brown (or shades thereof) so I thought I could substitute them for my OMG (One Monthly Goal).  Turns out I didn't have enough of the (really weird) background fabric to complete the full quilt as planned -- probably why it wasn't finished -- so I decided to make two smaller quilts.

This involved a lot of reconstruction in order to balance the background fabrics (more on that later) and this is where I currently stand.

Earlier in the week I had finished one Geese Migration (a/k/a Geese on the Move) block at the MCMQG retreat -- also brown, sort of ...

I'm linking up with Angela at So Scrappy.