The fridge is here!


After waiting almost 8 weeks the new refrigerator was delivered and installed Saturday.
Thank goodness we had a spare in the utility room! 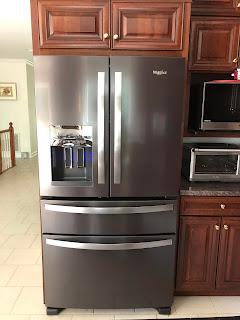 I suppose if we hadn't been so determined to get one like the one we left in Brentwood, it might not have taken so long.  Nevertheless, our experience with Lowe's in Crossville was less than stellar.  Maybe the fridge was on the same Fed-Ex truck as the dress I ordered for next week's wedding that went from Mexico, MO to KC, to Nashville (LaVergne), to Atlanta (Ellenwood), only to be taken to the USPO for delivery!  The jacket I ordered from a different source at the same time came in the mail in half the time.  Sheesh!

After the whirlwind round trip to Nashville on Friday, I settled in for a weekend of sewing and a productive weekend it was.  I first wanted to get started on the Rainbow Scrap Challenge color of the month -- orange.  I had made my geese units earlier in the week, so I spent a little bit of time putting the first 9 together (with Garden Mosaic units in between). 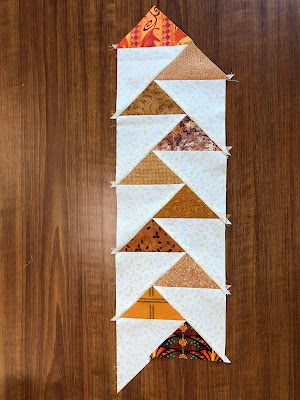 It's partly the lighting, but I went with the more subdued shades of orange in this column so that it wouldn't overpower some of the earlier columns.  I was surprised to observe how many of these were paired with purple or mixed with purple in the prints.  A pairing to consider in future quilts ...

As soon as Mari/The Academic Quilter posted the Squared Away sampler block for the month on Saturday, I went in search of some of my "jewel-tone" orange scraps to stay in the jewel tone theme of earlier months. 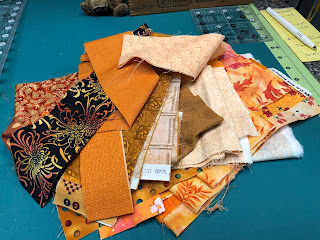 Since I have been through several "orange phases," I thought surely I would have something -- not!  So I did the best I could with what I had. 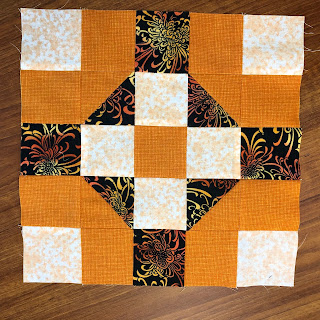 THEN I discovered I had four project boxes with bright orange yardage squirreled away in them!  I guess I still like orange.  If I have time I may make another orange block, but for now it is done.

I have had second thoughts about my plans for the king-size quilt to go on our bed.  I am taking a class in October and my initial thought was to expand that quilt to fit the bed.  But it is mostly log cabin blocks made from 1-1/2" strips.  Not only would it take a long time to make, it would be heavy with all those seams.  So I decided to go with a re-make of one of my favorite quilts (which I would show you if I could find the picture).  Staying with my planned yellow and gray scheme, there will be alternating gray and yellow backgrounds 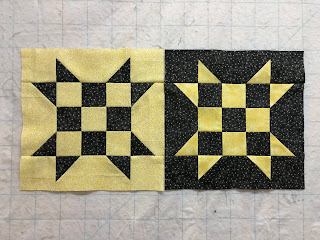 Though it looks black in the photo, it's really a dark gray.  There will b e a lot of variety in the yellows and grays and in an ideal world there will be no duplicate blocks.  We'll see.  I have been busy today cutting block kits to take to Devo and Sew on Tuesday.

Linking up with soscrappy and Oh Scrap!