On my way here yesterday I stopped by my LAQ to pick up three quilts.  My first order of business was to get them trimmed.  Two are picnic quilts for the grandsons who got married the last two summers.

Made from their shirts, they are pretty much identical.  I got the idea for the pattern from Jo's Country Junction.  The back is a heavy-duty dark gray chambray.  I promised these two Christmases ago, so it's about time to get them bound and on the way to a new home.

I also picked up this squirrel I finished earlier this year.

It was inspired by the background fabric and some Old Sturbridge Village prints I've had since about 2008. 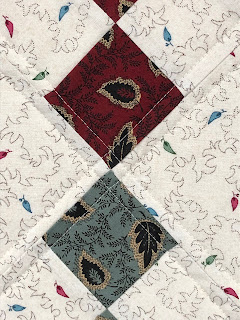 Simple 9-patches and solid squares with a "built-in" 9P border.  This may be a Christmas gift ...

Next I added borders to a top that has been languishing in the box since February.

I think the pattern name is Twist of Lime.  I saw it in a magazine.  It's another one of those whose size was limited by the amount of the main white fabric I had.  I think it looks a lot better with the borders on and won't be an embarrassment to give away.

We had a dusting of snow overnight but we were all here and settled in before it started.

Is still bleepin' cold, though.  This morning I set about catching up with the Mosaic Mystery (Meadow Mist Designs).

I wanted to finish one block to make sure I knew what to do.  Only 15 more to go.  I think I am really going to like this quilt!

After a little computer work this afternoon I will probably finish up my latest UFO squirrel.  Lots of pretty stuff going on here.  Check back tomorrow for an update.