Rocking at the Island

Back home from my annual retreat at Rock Island State Park. 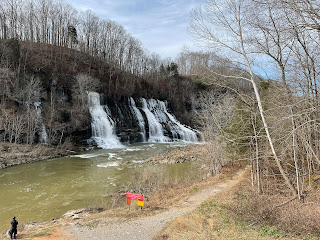 This was my 17th year hosting a cabin of 5 quilters.  The participants have morphed over the years, but the agenda is always the same -- sew, eat, laugh, repeat.  I have missed only one year (2020 due to the TOALT).

My first project after settling in on Sunday was the One Block Wonder I began as a class sample last year. 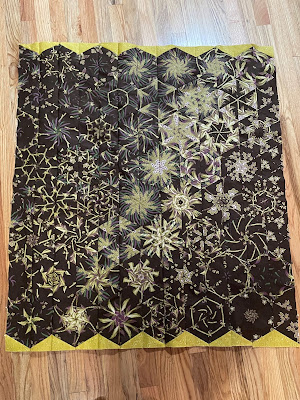 I thought it would be a quick finish but discovered I still had to construct about half of the columns and then put them all together.  It needs a good pressing before I can add a simple border of the gold.   After getting to that point on Monday, I started making chandelier beads to go on the unfinished Overhand Knots.  By Monday night I had this sweet piece: 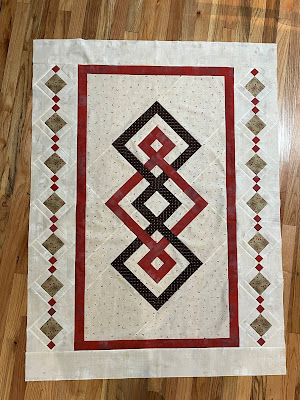 I plan to add a narrow stabilizing border on the sides and call it done.  Thanks to Diann/Little Penguin Quilts for suggesting the chandelier blocks.  They finish at 4.5", the size of the small red square.  I was amazed that the math was perfect for the already-bordered center.  Not the most professional approach, I'll admit, but sometimes we all get lucky!

Tuesday and Wednesday I worked on an original design I call Irish Grandmother (Irish Chain and Grandmother's Choice). Nann/With Strings Attached thinks it should be called Irish Fly!  I found 4-patches and cut strips for most of the blocks in the project box, but only two of the Irish Chain blocks constructed. 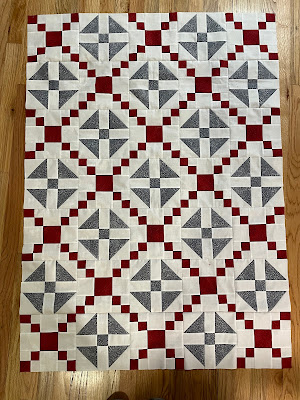 It, too, needs a good pressing before I consider what to do about borders.  I used the scarlet and gray fabrics in honor of my mother who graduated from The Ohio State University in 1930.  (And, BTW, she was not Irish ...)  Please note that those last two projects incorporated the RSC color of the month!

I had a couple of big projects waiting in the wings, but by Thursday I was brain dead so I spent the day making a pile of yellow and gray 9-patches -- mindless sewing.  I have no idea what I will do with them.

All-in-all it was another enjoyable gathering.  We had a companion group in the next cabin and spent some time cabin-hopping.  I had invited a neighbor quilter as a guest replacement for one of our regulars who was out due to eye surgery.  Since she is new to Tennessee, I took time to drive her to some of the sights in the park, including the twin falls in the opening photo. (I know, there's more than two falls there! I don't know where the name came from.)  The interesting thing about the falls is that the water is coming through the limestone bluff from a lake on the other side which resulted from the dam built in 1889 on the same river.

We are expecting heavy snow over Saturday night; more good sewing time to wrap up these projects.