Yes, I'm finally jumping in to Lee Anna's weekly linky party -- I Like Thursday.  Not that I am particularly partial to Thursday, but since it's Thursday, here's a look at what I like.

I like living in the woods.  Along with the deer, turkeys, turtles, and an occasional red fox or armadillo.

We don't live in the country; we live in a subdivision.  It just so happens that this acre and a couple more on both sides of us were only cleared enough to build on.  We truly live among the treetops, and I love it!

I like my garden -- or at least what's left of it after last summer's drought.  It never occurred to me how many days, really WEEKS, we went without rain last summer.  I should have been out watering; instead I just figured surely it would rain tomorrow.

I love my rhododendron even though it doesn't show.  In a normal year it would be looking like this right now.

Between the drought and oddly-timed freezes that nipped the buds, it needs some serious pruning if it's going to recover.  I do see some signs of new growth so there is still hope.

I like the different hues/tints/shades of green in the garden.  This variegated euonymus was pruned back drastically last year because it was beginning to restrict the pathway to our main entrance (which faces the rear).

It is coming back with gusto and you can bet I'll keep it well watered this summer.

Another shade of green is almost burgundy.

This bush was transplanted as a twig and has doubled in size every year.  In the shadow of this bush, but not visible in this photo, is our most prolific Huechera (coral bells), also a gorgeous shade of burgundy.  Every year I plant more huechera, but apparently they don't like the environment because I've not been very successful in keeping them going.

I like Lenton roses (Hellebores).  These evergreen perennials thrive in our shade garden.  They are the first things to bloom -- usually in February, but this year they bloomed in January! 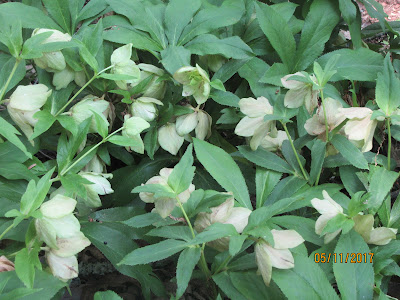 They are still blooming, but the recent rain has just about wiped them out. 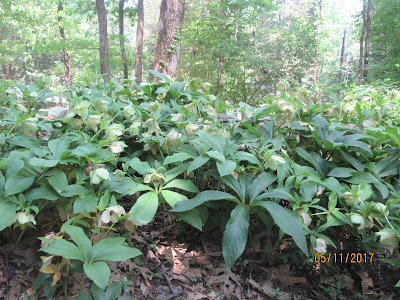 They self-propagate so even with the drought and cold, they've managed to bounce back.

I like unusual plants.  We are fortunate that the previous owners were expert gardeners and they invested in a lot of unusual and collectible plants.  One I've been calling Arum (probably inaccurately) has arrow-shaped leaves and a jack-in-the-pulpit-like flower.

The recent rain and cool temperatures have taken a toll on these blooms, too.  When the bloom fades, a bright orange seed pod remains.  It stinks!

Another weird plant that I have been unable to identify is this large-leaf specimen.

The underside of the leaves, which get quite large, is a deep burgundy.  In the summer it will put up a scraggly yellow bloom.  I've not found anyone who can identify it yet.  Are you game to try?

Crape myrtle blooms late in the summer when not much else is blooming.  But it is still attractive in the winter because of its peeling bark.  Normally I would cut back those suckers at the bottom, but I'm considering letting it become more bush-like this year rather than tree-form.

I like our hillside retreat.  Even though we chose this house because it would accommodate the needs of my disabled mother-in-law, we couldn't have found a more beautiful, peaceful environment to make our life more pleasant during the last 9 years.  We will be sad to let it go, but we are looking forward to a new life with just the two of us.

Drop by Not Afraid of Color to see what Lee Anna and others like.
Posted by Libby in TN at 6:19 AM