In this time of self-isolation, I decided a worthwhile project would be to reorganize my projects to see how many I can move a little further along.  I keep my projects in  Protect-n-Store boxes from JoAnn's scrapbooking department.  (Some quilt stores package their kits in these, too.)

I can stack five of these 12"x12"boxes in the Itso cubes I got at Target (no longer available there or Amazon, either).  At the time they were the only cubes that would accommodate a 12" square. 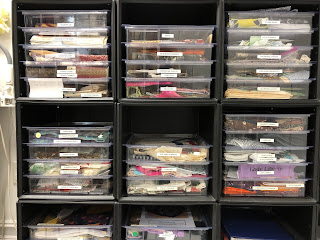 These are organized in alphabetical order (it's a personal flaw, I know!).  Well ... most of the time, but sometimes I raid a box for a ruler or some of the fabric and it doesn't get put back in its proper spot.  (I won't even talk about the stacks on top of the cubes ... another personal flaw.)

So ride along with me as I work my way through the stack alphabetically.  In my world numerals come before letters, so the first project is "1 Lump or 2" from Coffee Time Quilts.  I realize now I should have labeled that box with letters instead of numerals!

But first, a little background ... Around 2007-8 I had the "great" idea to make three identical Christmas quilts for our two married sons and my sister-in-law.  I chose this pattern by Margot Langedoc: 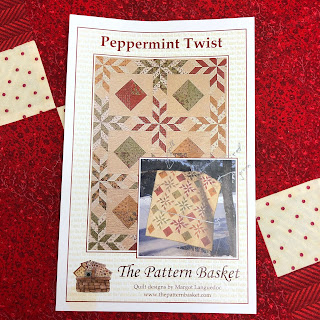 I have come to love Margot's patterns, but this was a little above my abilities at the time.  I was using a new-to-me $75 Janome from Hancock Fabrics and hadn't mastered its quarter inch so all those HSTs were a mess!  The one top I DID finish was donated to a catastrophe in Washington state.  My dilemma, though, is that I had already cut pieces for all three quilts!

I thought One Lump or Two would be a good alternative pattern that would use the mound of 5" squares and 3" squares I had already cut. 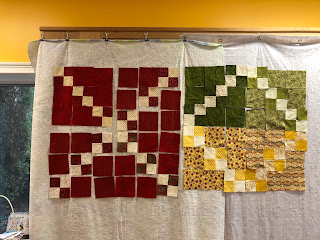 My first block is boring and clunky. 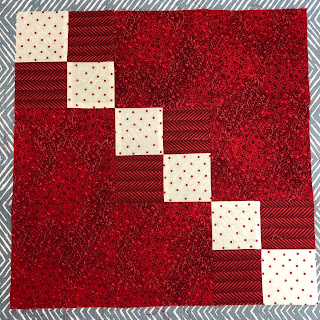 I went ahead and made a bunch of the 4-patches but I am still looking for a better project that will use these pieces.  In the meantime, the project box has been relocated between the N and the P!