While reorganizing my project boxes, I found another B!

Broderie Perse is a technique of cutting motifs out of a printed fabric and appliqueing them to a background in a new arrangement.  It was a popular technique in the 18th and 19th centuries when printed fabric had to be imported into the U.S.  Because it was expensive, flowers and swags could be cut out of small remnants and spread out, usually in a medallion style that resembled chintz palampores which often featured a tree of life in the center. (That's my definition, and I'm sticking to it!)

Anyway, I started this sometime before 2002.  I used an upholstery-weight fabric to cut the flowers and I included an old dresser scarf as a dimensional element. Everything is attached with fusible except the edges of the scarf.

I recently added a few more flowers to balance the composition.  Now top stitching and thread painting are all that need to be done before quilting.  I might treat this like Bullseye and let the stitching be the quilting.  Once I get a couple more of these little projects in a pile I will break out the Pfaff and get stitchin'!

Updates:  Great progress was made on Buckeye Stars yesterday!  I finished all the blocks today.  All the setting squares and triangles are cut and assembly has begun!  Only 5 long seams till I have to make a decision about the border. 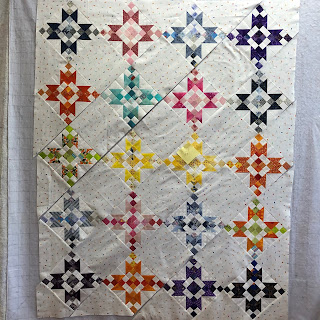 The broth I made on Tuesday was a bit unremarkable by itself as lunch.  It definitely needed more salt and something in it gave it a little "off" taste -- maybe the one cabbage leaf or possibly the plethora of asparagus stems.  Anyway, I combined it with some leftover corned beef broth last night to make a sausage and kale soup in the pressure cooker.


My husband, who is not a big soup fan, declared it delicious and a "keeper"!