Another Day, Another Finish

Yesterday morning I pulled out what I thought would be an easy finish -- the oversized table runner that's now a throw needed some stabilizing borders on the sides. 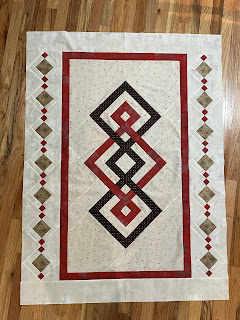 I had cut the borders at home from what I thought was the same Grunge I used in the Chandelier Beads on the sides, but it was too white to make me happy so I put that project away.  Fortunately, I will be driving by Whittle's on the way home from retreat!  They have an amazing selection of Grunge to choose from.

In between raindrops I ran out to the car to retrieve a couple more project boxes.  Scarlet and Grey (Irish Grandmother) needed its borders.  (If you sense a theme here, it's because I can use the large tables at this retreat center to lay out and properly measure.) 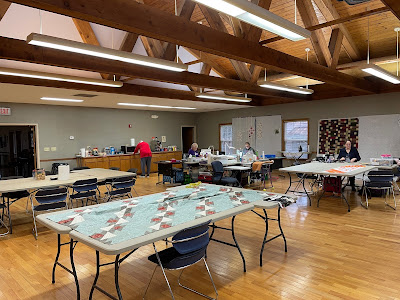 After a lot of measuring, and even more pinning, I had this finished. 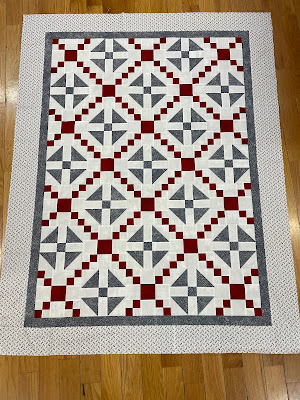 I have passed it on to one of the gals here who is distributing quilts to Waverly flood victims. Here's a closeup of the fabrics; they're not as solid as they appear in the above photo. 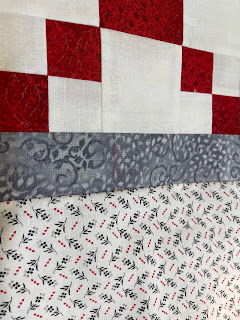 Positivity, a quilt from The Colorful Fabriholic's book, was up next.  A nice stop border then whoops! 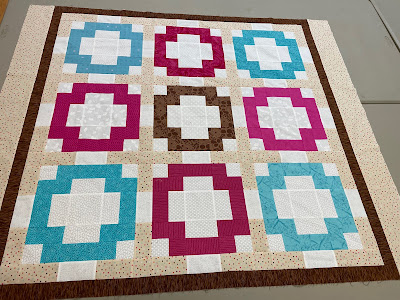 My last two outer border pieces are not long enough!  I'm thinking maybe I planned to use the brown for binding; I really should leave myself some notes 😒  If I don't have more fabric at home, I can easily add cornerstones.

I have one more border project that I'm just not excited about so I think today I'll make some double 4-patches to mix in with some 4-patch posies.  I might even get around to the border on that one ... we'll see.