Is it Friday already?

Where did the week go?


There's nothing like a quilt retreat to recharge the stitching batteries --
and make one lose track of time!

Since DH was finishing up a small consulting job, I accepted an invitation to go to a retreat hosted by the guild I used to belong to.  I was hoping it would help me get back into quilting (and blogging) after a month off.  So let's see how I did.

The first project was to trim Chex Mix which had recently returned from the LAQ.

I am so in love with this quilt, made from leftover 9-patches from another project.  The blocks are a variation of Nancy's Choice (I think), but I made the outside round of each block a bit larger so that the star points would "float."  That way I didn't have to match points between blocks or use sashing to separate them.

I also love the quilting design in each block. 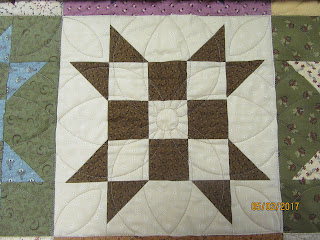 She used the same design in each block, but the differing fabrics make each one look a little different.  I forgot to bring along fabric to make and apply the binding.  Oh, well ....

My next project was adding the diamond sashing to the top and bottom of Poppies.  The blocks are 4-patch posies.

I don't have enough of the fabrics to do sashing on the sides.  I'm still considering adding a small black border all around, but hadn't brought additional fabric with me.

My next project was Bonnie Hunter's 2016 mystery, En Provence.  I had vowed I would not make it and with each clue I restated that vow, but somehow I managed to make everything up until the final construction.  Because I wasn't happy with my fabric choices, the project stalled.  Nevertheless, I was determined to make something with the pieces/parts I had already done.  This is the best I could come up with.

I got the center medallion portion together using the finished star blocks and portions of the alternate blocks.  I am using the neutral 4-patches to fill the corners and will pull some more of the lavender used in the star blocks as setting triangles in the border (I borrowed some lavender from a friend to see if my idea would work).  To be finished later.  And I still have a pile of purple 4-patches to work into another project.

Next up another Bonnie Hunter mystery, this one from 2013 -- Celtic Solstice.  I really liked this design, but couldn't work out the pieced border.  Apparently I hadn't made enough Peaky/Spike units, yet I thought I had made the number I counted in the picture.  Never could get it to work out and so had put it aside (for 4 years).

I got the white inner border on and started adding the pieced borders, but I still didn't have the right number of units so I made a few more that didn't match.  Not happy with that solution I stopped work.  I have just now figured out where I went wrong; the inner border is too wide.  Another project for another day.

I put some spiderweb blocks on the wall to audition a background fabric, but decided the red was not the right choice, or at least not the right shade of red. 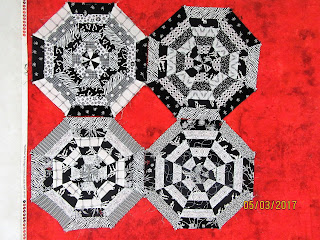 So I spent the rest of my time cutting a new project, a sale kit I purchased on Craftsy last year.

All-in-all I have no "finishes" to my credit, but I have gotten back a bit of my quilty mojo.  This month is relatively clear so I should be able to make some more progress on these and other projects.