C is for Chicken

Gayle at Mangofeet got me thinking about chickens with her recent piglet (you have to see it to understand).  And I remembered a chicken phase I went through in my VERY early quilting career.

At the time -- 2000 or so -- there was a lot of chicken fabric on the market and I started collecting it.

I don't know why. I didn't grow up on a farm. I never even had a baby Easter chick (other than the chocolate kind, the head's the best part -- no I'm thinking of the rabbit ears ... but I digress).

I joined Cumberland Valley Quilters soon after we moved across town and in 2003 the guild decided to enter the AQS Ultimate Guild Challenge when the show was in Nashville. We had to have 10 quilts (voted by the guild) in order to enter.  Our theme that year was "The Illustrated Alphabet." The only "rule" we had, other than the size limitation determined by AQS, was that the letter we were illustrating had to appear in our quilt.

I decided to put all that chicken fabric to good use by making "C is for Chicken." 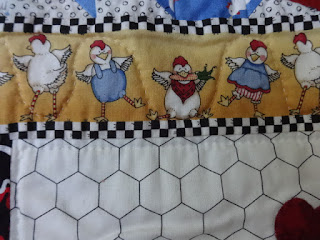 In addition to the chicken fabric, I tried to include several block names that referenced chickens, hens, chicks, etc.

I even included some applique.

I searched for a fabric that would pull all these disparate pieces together and thought this plaid would fit the bill.

Look at the name of the fabric !!! I just had to include a clip of the selvage.

Also, having been employed by The Coca-Cola Company for a number of years in Atlanta, I knew exactly what my C should look like.

Amazingly, our guild entry was accepted; that meant I would have a quilt hanging in a national show!! 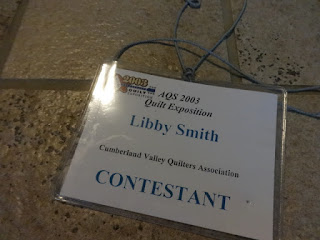 I was as excited as if I had won Best in Show. I was in the first surge of quilters to enter the exhibit hall when the show opened and I headed immediately to the Ultimate Guild Challenge section to have my picture taken with my quilt (see my profile pic).

So what if the guild didn't win; it was still an honor that I doubt I will ever have again.