Thursday I was up early to see what the Rainbow Scrap Challenge (RSC16) color for September would be.  Nothing.  Same thing on Friday.

I'm ashamed to admit that I had forgotten Angela at soscrappy would be right in Hermine's path and would certainly have other things on her mind!

Regardless, I decided to go to the studio to survey my options so that I'd be ready to move as soon as the color of the month was announced.  You see, each month this year I've been trying to link the RSC color to a UFO that I can set as my One Monthly Goal (Red Letter Quilts).

I pulled out two UFOs -- Star Gazing and Jubilee -- that had completed blocks and only needed sashing and borders to become finished tops. I decided to start working on Star Gazing, a quilt that I blogged about back in March, one that I had worked on while we were doing Grandparent duty over Easter weekend.

This morning Angela announced the color(s) for September would be rose reds with a gold accent.  Lucky for me, Star gazing has several stars that fall in the rose red category!! 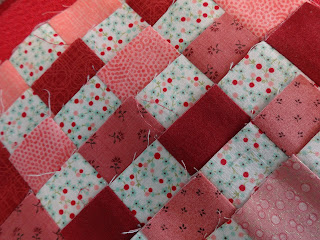 Not sure if this will be my OMG, but it will very likely get close to finished this month.