DWM - Note to Self

Make More Notes to Self!

Here's what was on my design wall this morning.

I started this in December 2013. I completed all the blocks in March of this year.  When I pulled it back out of the box last week, I made the assumption that the blocks had been squared down to 15-1/2". Should have made a note to myself.

The pattern said the horizontal sashing should measure 51-1/2". I learned a long time ago to not cut to the pattern measurement, but put a pin where the end should be. 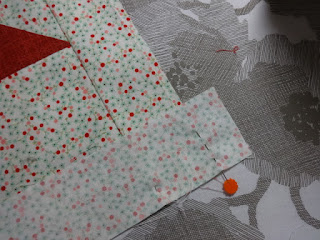 The first row of blocks came out to 52". However, instead of stitching that sashing on, I worked on the next row of blocks which measured 51-1/2", as did the next two rows. After a little adjusting of seam lines (and losing a few points) I whittled that first row down to size. SO glad I hadn't stitched the sashing on without checking the others! And SO put out with myself that I had not left myself any notes.

By the end of the day I had put a tiny flange on all four sides. And began attaching the border.


This should be an easy finish tomorrow (flimsy).

Linking up with Patchwork Times for Design Wall Monday.