"Gwennie" is Gwen Marston. For almost a quarter century she has been known in the quilting world for "liberated quilt making." In other words, she was doing improv when improv wasn't cool.  I have to say that of all the well-known quilters of the day, Gwen was one of the most influential to me. (Some day I plan to write about all the quilters who inspired me early on ...)

I took a "Liberated" class with Gwen at the Indiana Heritage Quilt Show in Bloomington (the same year I discovered Sara Nephew and became enamored with 60-degree angles).  In Gwen's class I made liberated/wonky stars and this liberated house: 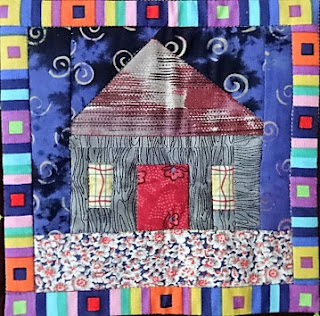 I don't remember if I added the cheater squares at that time or later.

Lori at Humble Quilts and 4 of her friends are collaborating on "Gwennie Inspired Medallions."  I have enjoyed following the monthly progress of those working on their medallions, and I got to thinking about the medallion I made after taking Gwen's medallion workshop at her Beaver Island Retreat.


I lopped off those on-point squares without hesitation -- not sure if I could bring myself to do that now. Guess I need to lose the tight pants, huh?