Out of the Depths

Sometimes I am amazed at where my mind wanders. I've been sticking to a plan, methodically working through UFOs, with a little bit of cleaning/organizing here and there lately.  This crept out in my latest cleaning binge. No, really, it pretty much JUMPED out and shouted LOOK AT ME!!!

I'm glad I did because, even though several elements had already been cut, there were some pretty nice fabrics in that project box that could/should go back on the shelf.

I don't know when I started planning this one; the pattern is dated 2012.  I think the pattern preceded the fabric, or maybe it's the other way around.  I was probably in one of my 4-patch posey phases.  Or maybe I was in my Jacobean phase ....

I had these lovely panels that looked like a cross between Jacobean tiles and kaleidoscopic posies. And they were the right size for the pattern.

My original plan was to use this background.

Kinda made me think of worms.  And it didn't really compliment the panels. So even though I had all the strips and squares cut, I put it back on the shelf and chose this marble dot, instead. 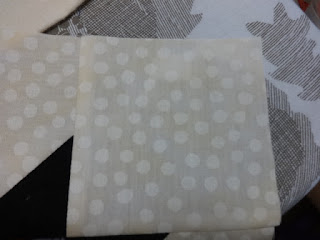 Using the pattern picture as inspiration, I chose black for the star points. 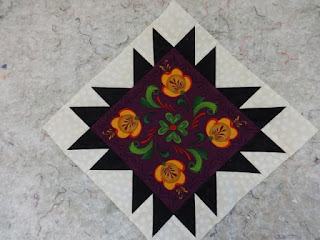 But after making a couple of sample blocks I realized that the black simply blended with the purple of the panels when I really wanted contrast in the star points. So I put all that cut fabric back on the shelf, as well, and chose a red, instead. 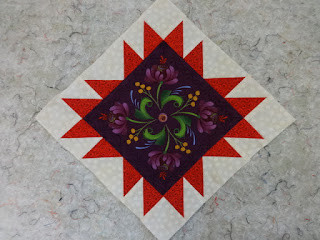 This quilt was nowhere on my radar at the beginning of the week! Now it's migrated to a higher priority. It might be something I take to an upcoming retreat. Or it might go back in the stack. But this time it will be ready to pick up and stitch when I have time.